In October 2007, several people attended an exhibit of West Islip memorabilia at the library.  Old maps, books, newspapers, scrapbooks and other items were there on loan from the  George Weeks Memorial Library and the West Islip Museum.  These two collections were housed at the Community Center on Higbie Lane.

Attendees were invited to come to come back to the library and share their stories and memories of growing up in West Islip.  We quickly realized that we all shared an interest in preserving West Islip history - and from that group - the West Islip Historical Society was formed.

The founding members are Nell Brosnan, Konny Lang, Terry Alleg,  Katie Hafele, John Oleksiuk, John Paserb, Gail Gyarmathy and Carolyn Agenjo.  Tom Spain, Donna Gerek, Joy Grimes and Joy Mangiaracina joined us soon after.  We regret to announce that John Oleksiuk and Konny Lang have since passed away, but their contributions to the group will be long remembered.

We currently gather at the West Islip Library for regular meetings, and occasionally gather for impromptu projects.  We welcome all who would like to join us - annual dues are $25. Contact us at the email address below for information or to discuss a donation.   We are currently planning exhibits for the West Islip History Center in the renovated LaGrange Building, which is open to the public on Sundays and Tuesdays from 12noon to 2pm.  We hope to extend hours in the future.

Some older information - links below may not work

Note:  This page does not get updated regularly, it is used to house the old information and photographs that were gathered when the Society first formed in 2007.  It also has records of some of the first few years' activities.  We will post new information once the restored LaGrange opens to the public - In the meantime, please visit our Facebook page for current information.

The 3-story historic portion of LaGrange has been renovated and relocated to face Higbie Lane. 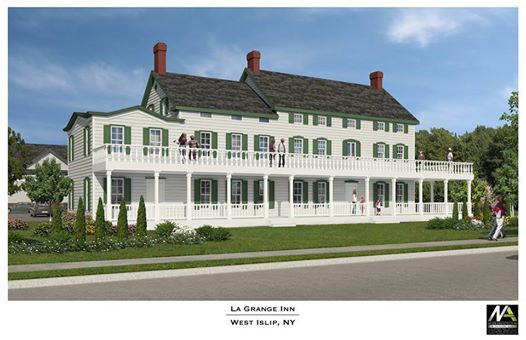 Visit this  "Save LaGrange" page for continuing photographic coverage of the renovation process.

(you will leave this Historical Society site)

Check out the links on the sidebar for items posted in 2007 through 2009.  Please visit our Facebook page for newer photos and recent events. Email wihistory@optonline.net  for information.

(Please note:  Some of the following links may not work due to recent changes on the West Islip Library website.  We are working to move all files off that server, and hope to quickly have the full collection on our current server.)

Did you see the West Islip history memorabilia exhibited on the Community Room Walls in October and November?  Many of the items are now hanging in the Local History Room/Group Study Room, and other such exhibits are planned.  Watch for an exhibit of library history, ask at the Reference Desk.

Each year, over 30 people gathered to honor David Ruland, the Revolutionary War veteran who  is buried in  the  Weeks-Muncy Cemetery on Boulevard Avenue.            In 2011, even a heavy downpour couldn't keep people away.  Join us each year at 8am before the parade if you would like to participate. 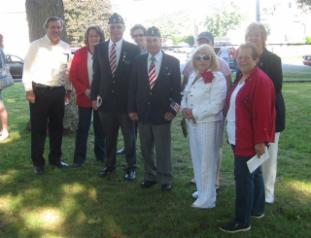 Thanks to members who manned the table, and supporters who donated raffle gifts, this was a very successful exhibit.  Many people stopped to view the maps that hung on the fence, and ask questions about our group.  We hope new members will join us. 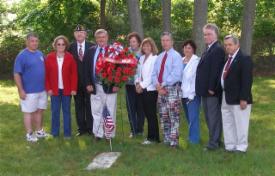 On Memorial Day, Monday, May 25, 2009 - we gathered to place flags on the graves at the littleWeeks-Muncy Cemetery - then met at the Paul Bellew School for the ceremonies after the parade to present  a memorial wreath.

There have been many changes as West Islip grew and developed into the community we know today. Although there is no mention of West Islip in a NYS Gazetteer from 1860, it does appear on old maps from that time. In 1874, it is noted as a place with people of “wealth and ease” and in 1885, it is mentioned as a suburb of Babylon, having 398 residents. By 1930, there were 734 residents, and today we number over 30,000.

Most of the large estates, historical sites and farms are gone now, but many people still remember them.

The West Islip Historical Society wants to gather your stories, photographs, and local memorabilia. Let’s not forget what our community was like as it grew. Join us in this effort to preserve those memories, and share them with others.

At some of our meetings, we've enjoyed having members talk, sharing their memories.  Everyone enjoys these stories - we hope more people volunteer this way!